Eye color: how it is transmitted

The way in which the eye color is transmitted from one generation to another, has not been completely clarified.
The first scientific model dates back to 1907 when it was published the work of Charles and Gertrude Davenport.
According to their model, the transmission mechanism would be Mendelian and very simplistic. It is assumed that there was a “gene for eye color” and that there were two alleles of this gene, one for encoding blue eyes and one for brown eyes.
The “blue” one of these two alleles would have been recessive and the “brown” one dominant.
Consequently an individual could only be born with blue eyes if both parents had at least one gene for blue eyes and two blue-eyed parents could never generate brown eyed children.

Unfortunately this model is inadequate to explain not only the nuances of which we have spoken, but sometimes it is completely belied by the facts.
As we have seen, the front layer of the iris, in the embryo, differentiate itself from the same membrane that give rise to the tissues of the skin.
It would be expected, therefore, that the genes that are involved in determining skin type, skin color and hair and melanin production in general, in one way or another, play a role in determine the color of the eyes.

To date, scientists have identified more than 150 genes that affect the color of the skin, hair and eyes, and, among these, at least 8 have a crucial role. (The list of these genes with a schema comparison between humans, mice and fish can be found at the website of the European Society for Pigment Cell Research.)
As we saw in the previous section, although the total number of melanocytes is roughly equivalent in all people , the amount of melanin produced by them and stored in melanosomes can vary greatly.
The gene that seems plays the most important role in differentiating blue eyes from brown has been identified on chromosome 15 and called OCA2.
The OCA2 gene results in the creation of a so-called P-protein that is involved in the process of melanin production. Individuals with mutations of this protein develop a form of albinism and different not pathological alleles of this gene lead to different levels of P-protein and ultimately of melanin. Individuals with a high level of P-protein tend to develop brown eyes and vice versa low levels of P-protein are associated with blue eyes.
However this is not a close correspondence as in the model of Davenport as the effect of other genes (as for example TYRP1 , ASIP and other visible in the table below) can increase the production of melanin even in case OCA2 push to lower it and vice versa. 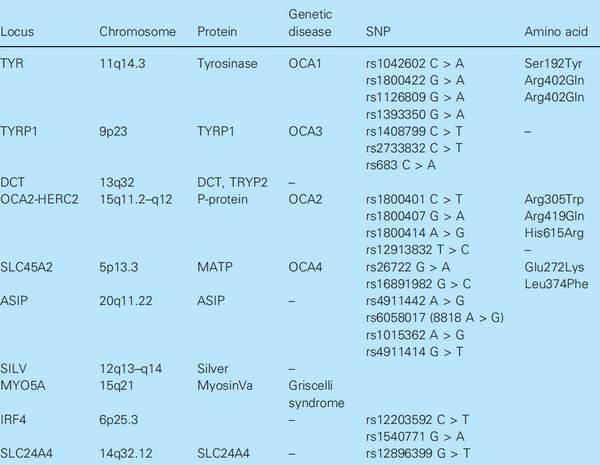 In literature there are the genes with designation EYCL2 (or BEY1, defined as the gene of the central brown) and EYCL3 or BEY2, with alleles brown (dominant) and blue. These genes are located on chromosome 15 and are now identified as part of OCA2.

It is also thought that there is another gene called EYCL1 also called GEY, located on chromosome 19 having alleles green (dominant) and blue. This gene has not yet been definitively identified.

In summary, if you want to make a prediction about the color of the eyes of an unborn child, given the predominant role of the OCA2 gene and the fact that the allele coding for brown eyes is dominant, the model of Davenport as a rough approximation still works, but it leaves a large uncertainty margin due to the presence of the other genes of which we have said. We can not say that from parents having blue eyes definitely will be born a child with blue eyes, but the chances are still very high.

As a side note, the allele of OCA2 that produces blue eyes is only present in individuals of European descent. Recent research seems that this gene has only appeared in the European population between 6000 and 10,000 years ago and is still not clear what was the evolutionary pressure that has led to the emergence of this nature in northern European populations.
It’s also possible that this emerged as a secondary effect of another favorable mutation. For example there is a 2002 study that shows that people with blue eyes are more resistant to depressive disorders, thus has been hypothesized that, in the long, dark and depressing winters of northern European Neolithic, people with blue eyes were advantaged compared to those brown-eyed.

Page 1. Eye color: how it appears

Page 2. Eye color: how it is transmitted