A matter of time and speed: George Mines 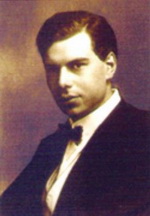 The protagonist of this paragraph is George Ralph Mines, which we see in the picture on the right in a photo that portrays him at the age of 27. Born in Bath, a town in the UK located in the South West England region, Somerset County, on May 13th 1886, George Mines, who was a prolific scientist in the field of experimental physiology, is known to have discovered what today we call the vulnerable ventricular period. This is a time interval of about 400ms, and corresponds to the ascending part of the T wave that we saw in the image in the previous paragraph. At that stage, the ventricular cells are in a relative refractory state where a stimulus may be able to cause contraction and be transmitted back to the atriums, resulting often in an arrhythmia and ventricular fibrillation.
Mines also studied the effect on cardiac muscle of various types of substances such as calcium, barium and potassium salts or the strophantin, a poison used on the tip of the arrows by some African populations.
He had a remarkable technical ability that allowed him to build by himself his equipment and was the first to use the Chronophotography method to study heart contractions.
Mines was the first to realize that in the cardiac conduction system, there could be two paths through which a stimulus can transmit along the muscle, a fast and a slow one, and described for the first time what we now call the phenomenon of the return. 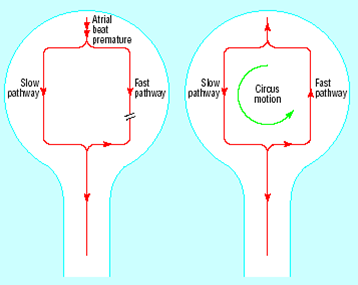 Mines pointed out that, under normal conditions, the two roads do not interfere with each other because the presence of the refractory period ensures that impulses that reach the cells at inappropriate times, find them in a state of non-excitability. However, some damaged tissues, or some with different lengths of the refractory period, may prevent the passage of the anterograde wave but allow the return of a retrograde wave, which is then re-injected into the pathway causing a tachycardia or fibrillation.

Sadly, Mines’s life had a tragic and premature end, probably due to his passion for self-experimentation.
Indeed, in the evening of November 7th, 1914, the night watchman at McGill University, who entered the Mines Laboratory for an inspection, found him unconscious, connected to one of his cardiac monitoring machines. The autopsy later revealed a death for ventricular arrhythmia.