It is a thermoplastic polymers that belong to the category of polyesters.
Their structural formula is the following:

In which there are two parameters R and n on which producers can intervene to create materials with different characteristics.
The radical R represents the so-called side chain and is an alkyl which may be of various types, linear or branched, saturated or unsaturated, aromatic, halogenated, etc.. while n represents the length of the linear chain.
In the following table we see some polymers obtainde varying the parameters mentioned above.

Particularly interesting is the poly-hydroxy-butyrate (PHB) who, having characteristics very similar to polypropylene (PP), especially when associated with poly-hydroxy-valerate, is a candidate to be a growing trend.
The polyhydroxybutyrate was discovered in 1926 by Maurice Lemoigne during his studies at the Pasteur Institute on the Bacillus Megaterium. His discovery went unnoticed because the production of PHB could not compete with the negligible cost of oil and its derivatives. A renewed interest there was in the 70’s due to the first oil crisis, and today the PHB is the focus of interest due to its biodegradability.
The production of polyhydroxyalkanoates and polyhydroxybutyrate goes through the exploitation of some types of bacteria.
The bacteria of the group Ralstonia produce polyhydroxyalkanoates with short side chain, while those of the type Pseudomonas produce polyhydroxyalkanoates with average length side chain. At industry level are used bacteria of the species Escherichia Coli in which have been transferred genes of the bacterium Ralstonia. In this way we use a bacterium whose biology is very well known, which is capable of producing the PHA but do not have the metabolic pathways to degrade it.
The production of the plastic material consists to grow the bacterial culture and, at a certain point of the development, subtract certain nutrients to the culture medium. This stimulates the bacteria to produce PHA and accumulate it on the inside with concentrations up to 90% by weight, as you can see in the following image on the right. 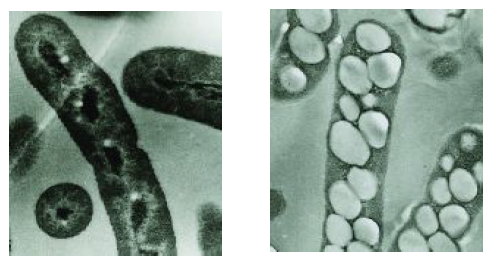 Another important use of biodegradable polymers is surgical. In fact, some of these polymers, in addition to being degraded by environmental bacteria are also absorbable by the organic tissues, making them suitable for uses such as surgical suture objects, and cardiovascular bypass innsechi for tissue growth.