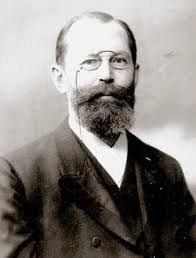 In this article, we still talk about chemistry and the substance that is the subject of our story is called glucose. But instead of exploring the properties and uses of glucose, we focus on what is a beautiful page of applied scientific method, dated to the late nineteenth century and starring the Nobel Prize for chemistry in 1902, the German chemist Emil Fischer, of which we see in a photograph reproduced here beside.

The work of Fischer that would eventually lead to what is now called the Fischer test was developed between 1884 and 1894. The efforts of Fischer were oriented to determine the structural formula of glucose and what makes his argument interesting is that he has achieved his goal through technological means that allow only indirect inferences.
Today we can confirm his results through the X-ray diffraction but back then the means at the disposal of Fischer were: 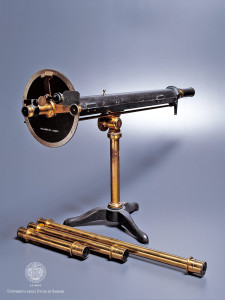 What we see depicted on the right is a Laurent polarimeter of the 1887 owned by the University of Sassari, probably very similar to that used by Fischer himself in his studies.
This device was used in tandem with a lamp emitting a monochromatic light, typically a sodium salt burned with a flame or, later, a sodium salts electric lamp.
The light thus produced enter the polarimeter and is polarized by a Nicol prism. Then the beam is split and one part directly reach the eyepiece while the other part passes through the solution to be examined.
Near the eyepiece there is another Nicol prism which allow to compare the polarization of the control beam with that is passes through the solution. From the comparison of the intensity via the goniometer embedded in the eyepiece you could determine the rotation that the solution give to the polarization of the light.

In the next section we will see how these tools were used to arrive at determining the structural formula of D-glucose.