The empirical formula of glucose was already known as it can be determined with quantitative methods: C6H12O6.
Due to chemical testing, as the Tollens essay, Fischer had already established that the glucose was reducing sugar and that belonged to the category of aldoses, that is it contained the group CHO.
Previously Fischer had already addressed the problem of chirality of some compounds and, in particular, of glyceraldehyde, had already studied the fact that it could exist in two forms which he denominated D and L .

Regarding the glucose it was supposed to be “child” of D-glyceraldehyde, which is more simple sugar aldose present in living organisms. Starting from D-glyceraldehyde one has the diagram below. 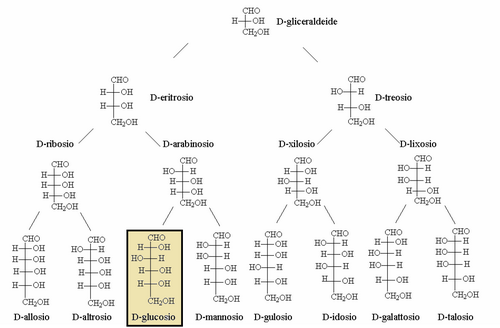 This chart shows all the compounds that can be inferred from D-glyceraldehyde by adding a group H-C-OH oriented in both possible ways.
The only group that is always oriented in the same direction is related to the carbon C5, the penultimate, which is what identifies the “D-series” .
We note that this table represents the “D-Series” as we know it today, with all the names of the various compounds and the glucose clearly shown alongside its epimers. At the time of Fischer everything was still to be discovered!
Fischer could isolate the glucose from the food, in fact it normally called grape sugar, but he did not know a priori to which box it corresponded.
For his analysis, he had to start from actual substances and associate them to the correct cells.
To do this, he used some experimental observations.