The test step by step

Knowing that the glucose was an aldohexose, Fischer was able to write immediately a generic structural formula. In fact:

With this information, all the possible candidates combinations are 8; Fischer could hypothesize them all immediately and proceed to exclusion. They correspond to the last row of the graph of the previous paragraph.

As a first observation, Fischer notes that both glucose and mannose, whatever their structure, if reacted with phenylhydrazine produced the same substance called Osazone.

This means that glucose and mannose have the same structure of the groups C3, C4 and C5 and differ only for the carbon C2, because C1 is definitely engaged in the CHO group.
Among the possible configurations above, we can create 4 clusters with the C3, C4 and C5 in common:

The experience also tells us that, by oxidizing both the D-glucose D-mannose with nitric acid, we obtain optically active acids, which Fischer could control the polarimeter.
Oxidation involves fact that both the group CH2OH and the CHO are transformed into COOH.

In groups 1-2 and 7-8 there is one of the two compounds which, once oxidized, produces an acid whose molecule is perfectly symmetrical, for this reason it is not optically active, and then the group can be discarded as a possible candidate. 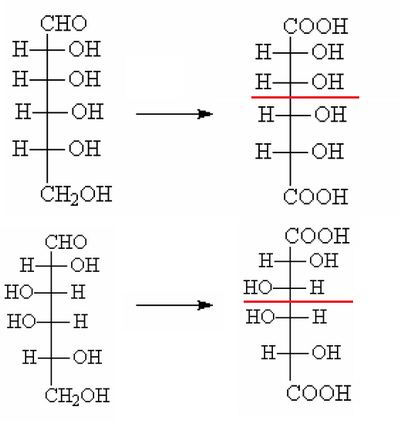 It remains the choice between groups 3-4 and 5-6.
Here Fischer does another experimental observation, applying the Kiliani-Fischer reaction to the D-arabinose.
He still does not know what the structure of this sugar (the D-arabinose), but knows that it’s an aldo-pentose, that is an aldose with 5 carbon atoms. The reaction Kiliani-Fischer allows him to add a HCOH group to the chain and turn it into a aldo-hexose and then oxidizing the group CHO in COOH he produces the same monocarboxylic acids that are produced from the glucose/mannose pair.

This means that the D-arabinose is actually the founder of the pair D-glucosio/D-mannosio.
However, still remain to define the structure of the D-arabinose. There are two possibilities, but you can apply the same oxidation procedure used before: 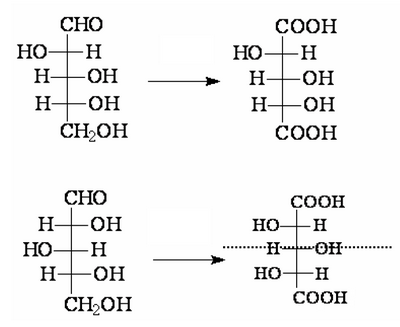 Of the two configurations, the one below, once the ends are oxidized, produces a dicarboxylic acid perfectly symmetrical, but we know that oxidizing the D-arabinose is produced an optically active acid, thus asymmetrical. AS a consequence, the structure at the bottom can not be that belonging to D-arabinose.
In this way the structure of the D-arabinose is clear and thus is also identified the couple glucose/mannose which will be the one indicated as 3-4.

The last step is the one that finally makes it possible to distinguish the D-glucose from D-mannose and is slightly more complicated to display.
Consider the structures 3 and 4 and imagine to exchange the CHO group with the group CH2OH at the extremes of molecule.
After the exchange let’s rotate the modified molecules to realign with their version before modification.
Note that in the case 3 is obtained a aldohexose different from the former one while in case 4 the final molecule is identical. 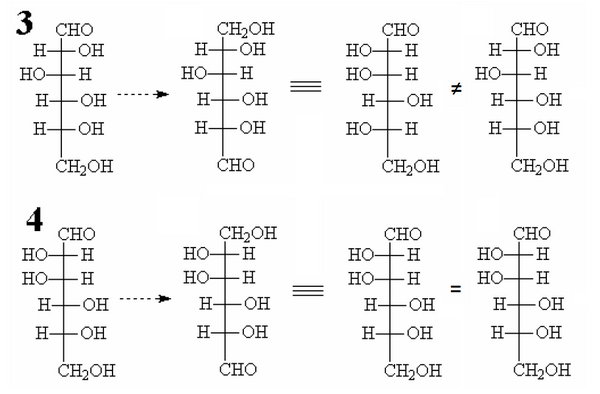 Fischer devised a complex chemical reactions that performed exactly this “exchange” in the ends of the molecules and applied to real-glucose.
The result was to obtain an aldohexose different from the starting one, therefore the structure of the glucose had to match that we have identified as “3”.