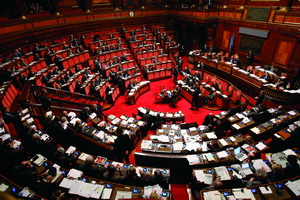 In spite of the title, this article is NOT about politics!
Given that we are approaching the electoral period and given the fact that the electoral law in Italy is often the subject of discussion, I thought it might be interesting to know some mathematical curiosity about the methods of sharing and representing the will of the people.

The argument is obviously vast and has been dealt with by philosophers and politicians since antiquity. Recently, economics scholars have made important contributions, addressing social decision processes in the broader framework of game theory.
Here we try to give some hint only to some of the most interesting and historically relevant results.

Before considering the “by majority” voting system, let’s also mention the decision-making process at unanimity by which all voters are required to agree on the final outcome, or at least make a very high (relative unanimity). The application of this criterion however is extremely limited. In practice it can only be applied in confined groups and special situations.
That said, in setting up an electoral system, we would like to find a voting model so that the outcome of the elections is representative of the will of the people. The following considerations apply not only to the election of parliamentary representatives, but also to the votes of a law or an amendment, or for a jury’s decision in a trial, and so on. To set the ideas, however, we will refer to a hypothetical electoral turn where citizens are called to express preferences between two or more candidates.
It is assumed that each elector decides his preference among multiple candidates by referring to a personal scale of values ​​that allows him to sort the possible alternatives.
The electoral law represents the mechanism by which seats are allocated to parliament so that it reflects the scale of preferences of the voters’ group, or at least produces a breakdown close to the scale of the largest number of voters.

Let’s first consider the simple case: 2 candidates, that is, two possible choices. The method of choice is the majority vote.
If the candidates are called Aldo and Bruno, the individual’s preferences can only be A>B or B>A (let’s neglect the equality case that in a popular vote is highly unlikely and would only serve to weigh the discussion) and the outcome of the vote will only fall into one of two possibilities.
Things get significantly complicated if the candidates are 3, say Aldo, Bruno and Carlo. Let’s see it with a simple simulation.
Suppose voters are only 3 and call them 1, 2 and 3.
Each of them will have a personal rating of the three candidates, for example A>B>C for the voter 1. The scale of each voter is represented by the corresponding column in the table.
Let’s put the three charts in a table as follows:

As we can see, reviewing voter preferences, B>A twice out of three, C>A twice in three, and still B>C twice to three.
This means there is a sorting of the preferences upon which all three voters agree: B>C>A. In this hierarchy of preferences, the winner of the election would be Bruno which, in the worst case, would be the “less unwanted“.
The preference chain, in this case, has the property of being transitive. You can say that, if B is better than C and C is better than A then B is even better than A.
This is a particularly fair decision system, but it is also particularly laborious if the candidates are so many, because it is necessary to consider all the possible pairs of preferences.
It was described and examined in depth in 1785 by the Condorcet Marquis who immediately pointed out an important defect, defining what we now know as Condorcet Paradox. Let’s look at it with an example related to the previous one.
Suppose the preferences of the three constituents were the following:

In this case, we see A>B twice on three, B>C twice on three and C>A again twice on three. So if we try to order the preferences, we find: A>B>C>A. It creates a circular order for which you can’t find a winner!
The preferential relationship between the candidates, in the paradoxical case, is losing the transitivity we mentioned it before.

The power of the agenda

Various methods have been proposed to circumvent the paradox, each with its own limitations.
You may think of breaking the circularity of preferences by imposing a voting agenda. In that case, you can first choose between A and B and make the winner compete against C. From the inequality chain you can see that between A and B wins A but he lose against C. So the final winner would be C.
At first glance the inequality of the previous situation seems to be resolved. But at what price? Let’s note that if instead of the voting order above we had A against C, in this case C would win. And finally B against C and B would be the final winner. That’s how the outcome of the vote is manipulated by the order in which the agenda is drawn up. The real winner would be who has the management of the agenda manager in hand!
Other solutions are given in the next paragraph.

Page 1. The power of the agenda

Page 2. Remedies to the paradox: Majority

Page 4. The theorem, a converstional demonstration