The cochlea: operation in detail

The purpose of having groups of cells excited selectively as a function of the sound frequency is obtained through the physical conformation of the basement membrane.
The basement membrane is a membrane formed from elastic fibers stretched between bone ridges projecting towards the interior of the duct. They are thick and short in the peripheral zone and become longer as the pipe is wound tightly inwards.
In the images are visible a schematization of the longitudinal section of the cochlea, that represents the trend of the fibers, and the width of the membrane itself and a cross section in which is shown schematically the variation of the thickness of the membrane. 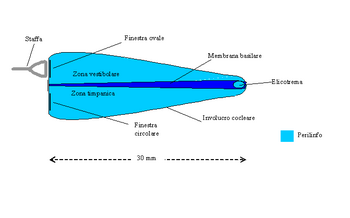 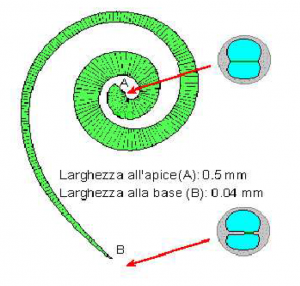 Thanks to this particular structure of the membrane, the elastic stiffness is not constant, but is about 50000 times larger at the base than the apex decreasing with approximately exponential law.

As we said before the waves enter the cochlea through the oval window, which supports the stapes. A pressure wave will produce a deflection of the membrane towards the scala tympani, and vice versa.
Due to its structure, however, the basilar membrane will not react the same way along all its length to the various stresses. The change of mass and stiffness along the membrane causes at each point the resonance frequency to be different. In particular, the high frequencies will make vibrate more the portion of the membrane closest to the oval window, while the lower frequencies will make vibrate the more distant portion, nearest to the helicotrema.

In the following image you can see the pattern of the resonance frequencies as suggested by Hermann von Helmholtz who is the scholar who first proposed this model.

When a complex sound, consisting of different frequencies, enters the cochlea, the result will be that different points of the basilar membrane will vibrate with different amplitudes in function of the spectral composition of the input signal, stressing in a different way the hair cells which are distributed along the membrane. The fact that the sensitive cells are excited by different tones at different points makes that their distribution is called tonotopic. This organization of nerve fibers is preserved all the way to the brain and the primary auditory cortex too retains a tonotopic structure.

Page 4. The cochlea: operation in detail