Detergents up to the present day

The first differentiation between detergents is the type of surfactant used.
As we saw, the surfactant is what gives the soap its actual capacity to wash, thus to distinguish its type is crucial.
Each surfactant has a hydrophobic tail, which to be effective must be composed of a chain of at least 12 atoms of carbon, and a hydrophilic head and the latter is what allows for a general classification.

We will have surfactants:

One of the weaknesses of traditional soap is that it has a strong tendency to react with the salts of calcium and magnesium that are present in hard waters.
The soap is neutralized by binding to these salts present in the water and form a precipitate that is deposited on the surfaces to be washed, making them opaque.

In the 30s the chemists in an attempt to find a substance that does not suffer from this defect, synthesized the Benzen alkyl-sulphonates who were the first synthetic soap products from petroleum.
They did not create precipitates with any kind of water, were cheap and had a large and rapid spread in the 50s when they were put on the market.
What became apparent after a few years is that these compounds, highly-branched chains, were not attacked by microorganisms, which can degrade only linear chains, and piled up in the environment.
In 1966 were replaced by a new class of substances, the linear alkyl sulphonates (LAS), which on the contrary were biodegradable.

Another additive that has been heavily used in the past is the sodium phosphate, which in conjunction with the other surfactants greatly increased their efficacy. Used in combination with the household bleach is effective in removing mold and is used, after washing with hydrocarbon like turpentine, to eliminate the residues. 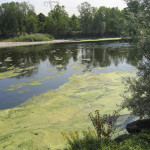 The other side of the coin is that this excess of biodegradable substances, in addition to the aforementioned phosphates and to other residues from the use of agricultural fertilizers, has led to a hyper-manuring of the marine environment resulting in the phenomenon known as eutrophication.
The increase of nutritive salts in the aquatic ecosystem generates an increase of algal biomass, which in turn causes an increase to the next steps of the food chain. When the algal growth is no longer controlled by the reduction of nutrients or other factors, it will form a biomass increasingly consistent destined to degradation (chain of the debris.)
If in the water is available a sufficient quantity of dissolved oxygen (necessary to respiration of the aerobically operating organisms), the chain of debris is kept active by fungi and bacteria, who proceed without problems in the mineralization of organic matter, but if the demolition of the biomass occurs with excessive consumption of oxygen and at a speed greater than that of oxygen regeneration, it’s established an anoxic or anaerobic condition.
Then the demolition process of the biomass is taken over by degrading anaerobic organisms which release compounds that are in the most part toxic (such as ammonia and hydrogen sulfide).

From the second half of the 20th century the use of sodium phosphate was therefore discouraged in favor of other substances such as sodium carbonate, which, however, is less effective, or zeolites. In 2004 the European Union issued a regulation requiring biodegradability for each detergent and intends to ban completely the sodium phosphate starting in 2013.

Today in detergents, in addition to the substances already mentioned, there are also other additives with different functions.

And there are many other types of detergents with special formulations that make them suitable to clean the wood, metals, glass etc.. etc..

Page 1. A Brief History of detergents and soaps

Page 3. Detergents up to the present day