The polyethylene was synthesized for the first time in 1935. This is the simplest of all polymer being formed, as we have seen also in the previous paragraph, by a chain of carbon atoms each accompanied by two hydrogen atoms.

In reality it may happen that, in the place of one of the two hydrogens, it connects another piece of polymer chain, giving rise to ramifications. In a mass of polyethylene is reasonable to expect always a certain percentage of ramification.

The presence of the ramicfications alters the mechanical characteristics of the material, because they prevent the chains being packed too close one another. A highly ramificated PE will have a lower molecular weight and poor mechanical properties, but it is easier to produce.

We distinguish two types of polyethylene: 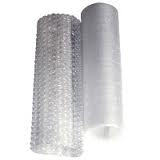 Polyethylene is widespread. For example it is used for the production of bags, boxes, tapes, bottles, garbage bags, hoses, toys, etc..
In the picture on the left we see the rolls of film for packaging and bubble wrap. 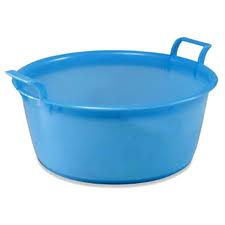 Probably if you have a basin for washing like the one in this picture, it will be made of polyethylene.

Being a thermoplastic polymer, it softens and melts as the temperature increases. It can withstand a maximum temperature up to 140°C (284°F), for this reason the kitchenware made ​​of polyethylene are not suitable for dishwashers.
In the following image, finally, we see the uses in percentage of the two forms of polyethylene.